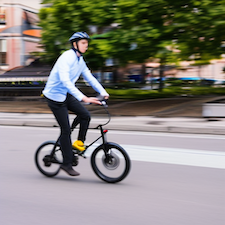 Electric bicycles, also known as e-bikes, have become increasingly popular in recent years due to their convenience, efficiency, and environmental benefits. In New Jersey, e-bikes are allowed on streets, bike lanes, and some sidewalks, provided that they are used in a safe and responsible manner.

E-bikes are becoming more popular in New Jersey for a variety of reasons. One reason is that they provide a convenient and low-impact form of transportation that is easy on the environment. E-bikes do not produce emissions and can help reduce traffic congestion and air pollution.

Another reason for the growing popularity of e-bikes in New Jersey is that they are a fun and efficient way to get around. E-bikes are equipped with a motor that provides assistance when the rider is pedaling, making it easier to climb hills and travel long distances. This can be especially helpful for commuters who want a faster and more convenient way to get to work.

In New Jersey, electric cycles, also known as e-bikes, are treated differently from motorcycles under state law. E-bikes are defined as bicycles that are equipped with a motor that provides assistance only when the rider is pedaling and ceases to provide assistance when the bicycle reaches a speed of 20 mph.

Under New Jersey law, e-bikes are treated the same as regular bicycles and are subject to the same rules and regulations. This means that e-bike riders are not required to have a motorcycle endorsement on their driver's license, and e-bikes do not have to be registered with the state.

However, e-bikes are subject to some additional regulations. For example, e-bikes are not allowed to be ridden on highways, and riders must be at least 16 years old to operate an e-bike.

In contrast, motorcycles are treated as separate class of vehicle in New Jersey and are subject to different rules and regulations. Motorcyclists are required to follow the same traffic laws as other vehicles. They are required to have a valid driver's license with a motorcycle endorsement and must register their motorcycle with the state.

In addition to these general requirements, there are several specific regulations that apply to motorcyclists in New Jersey:

It is important for motorcyclists to be familiar with these regulations and to always ride safely and responsibly.